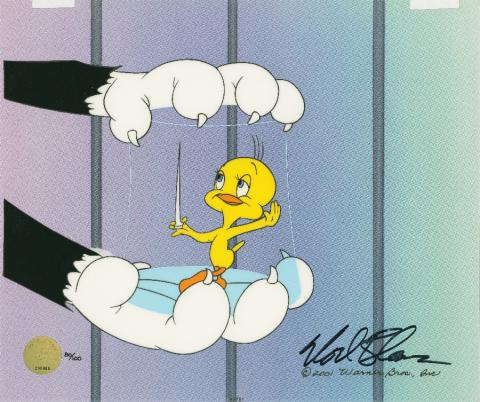 "Termite Terrace" was originally a nickname referencing the small building that Tex Avery and his animation team worked out of for about a year. This team included the likes of Chuck Jones and Bob Clampett. The nickname later was adopted as a reference to that particular classic animation department, even after the building itself was torn down. This limited edition cel was created in 2001 to pay tribute to the beloved characters which were brought to life by the Termite Terrace team. This hand-painted limited edition features Tweety,Sylvester and was designed as part of a set called the Termite Terrace II Portfolio, which was created with the involvement of Chuck Jones. The cel has been hand signed by voice actor Noel Blanc, son of legendary Warner Bros. voice artist Mel Blanc and is in very good condition. The cel measures 10.5" x 12.5" overall with the painted character image measuring 7.75" x 8" and it is paired with a lithographically printed background.